“In the Depth of Reflection. Oskar Zięta at the Gdańsk Museum”

Oskar Zięta’s steel sculpture will hang over the visitors’ heads at the Artus Court, Museum of Gdańsk, till November, 2021.

Zięta is an architect, artist and process designer, creator of over 200 original utility forms that manifest his own recognizable style, author of sculptures that demonstrate his passionate experimental approach to design. This time, he has created something totally unusual. Known for geometric steel forms in public spaces such as NAWA, WIR or Firefly, he reached for inspiration to the sea-related history of Gdańsk, where he was invited to create artistic interventions into the historical space of the Artus Court and Uphagen House.

Kraken is a steel creature from the depths of the sea, brought to life by Oskar Zięta and hung in the Artus Court as a reminder of Gdańsk’s strong relationship with the sea. Collected in this monumental building, called the salon of old Gdańsk, there are works of art or their replicas that refer to ancient and medieval legends. With his sculptural installation, Oskar Zięta refers to both the old myths and the present character of the Court. 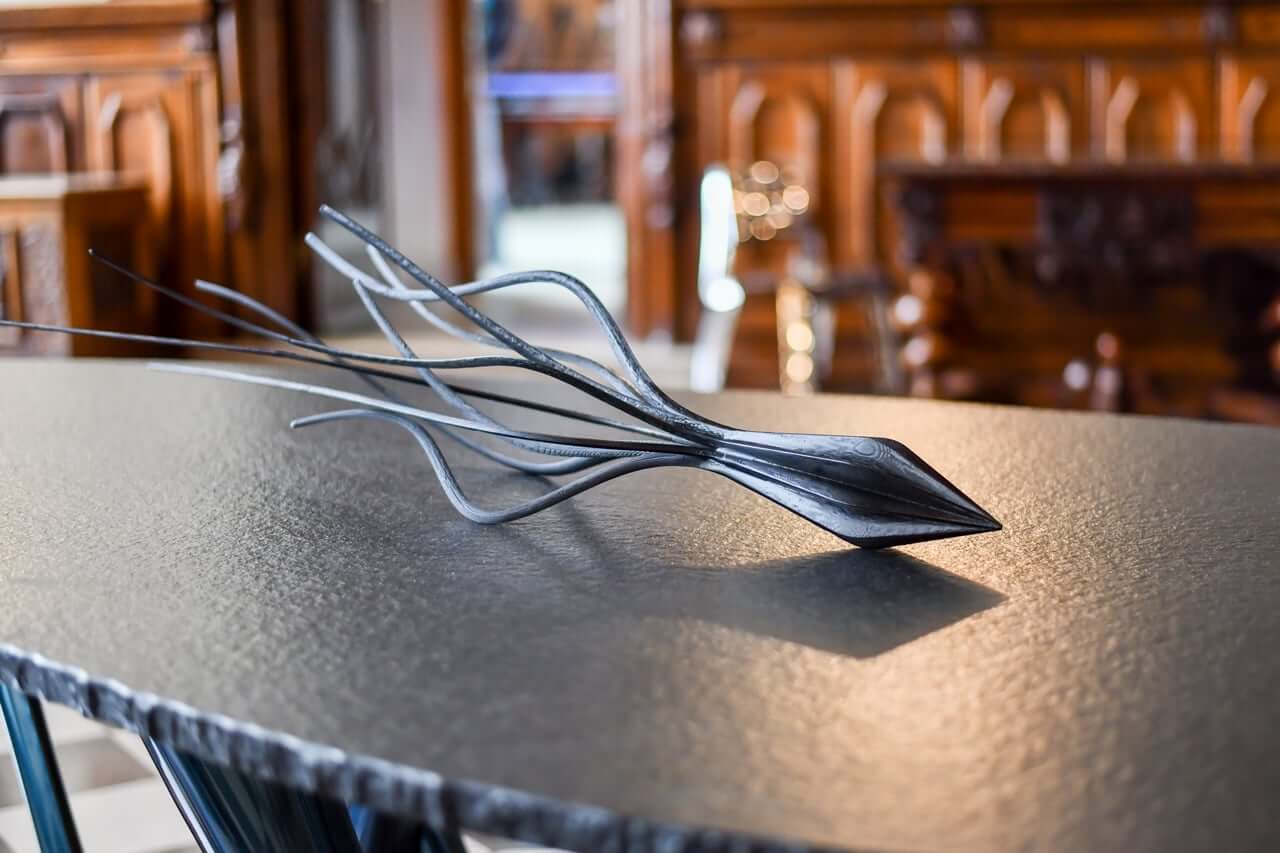 Kraken is the artist’s latest sculpture, intimidating with its scale and momentum. It is a steel representation of the legendary sea creature that Pliny the Elder wrote about – the monster inhabited the Strait of Gibraltar, where it attacked the ships passing there. In the modern era, the creature was described by Erik Pontoppidan in his work Natural history of Norway (1752). The sculpture consists of an almost four-meter head, which is connected to eight tentacles, 5  to 10 meters long. 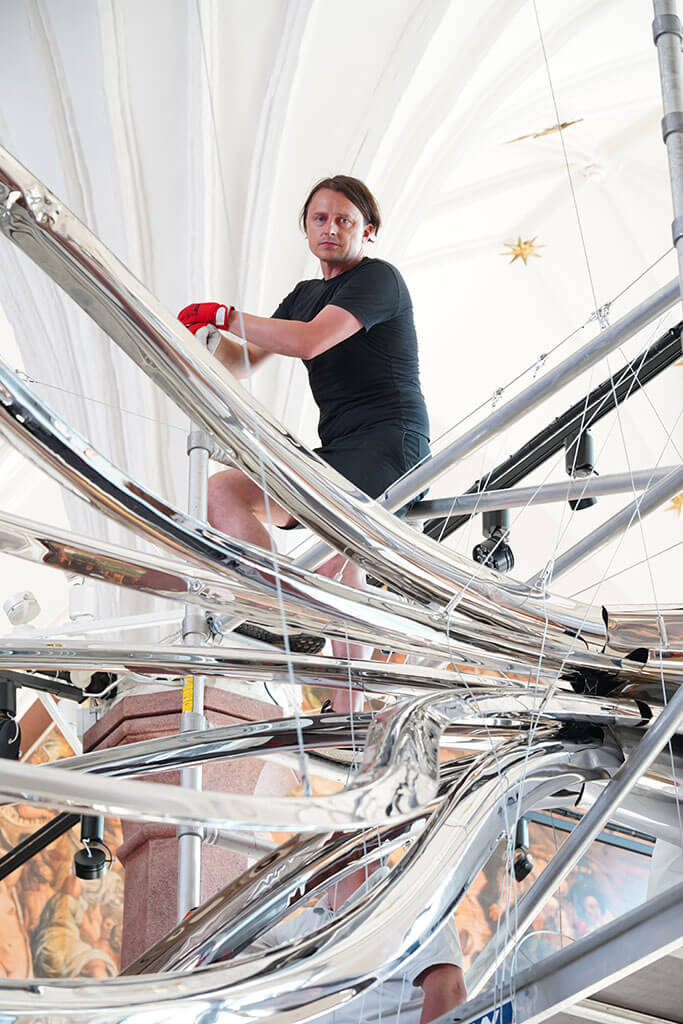 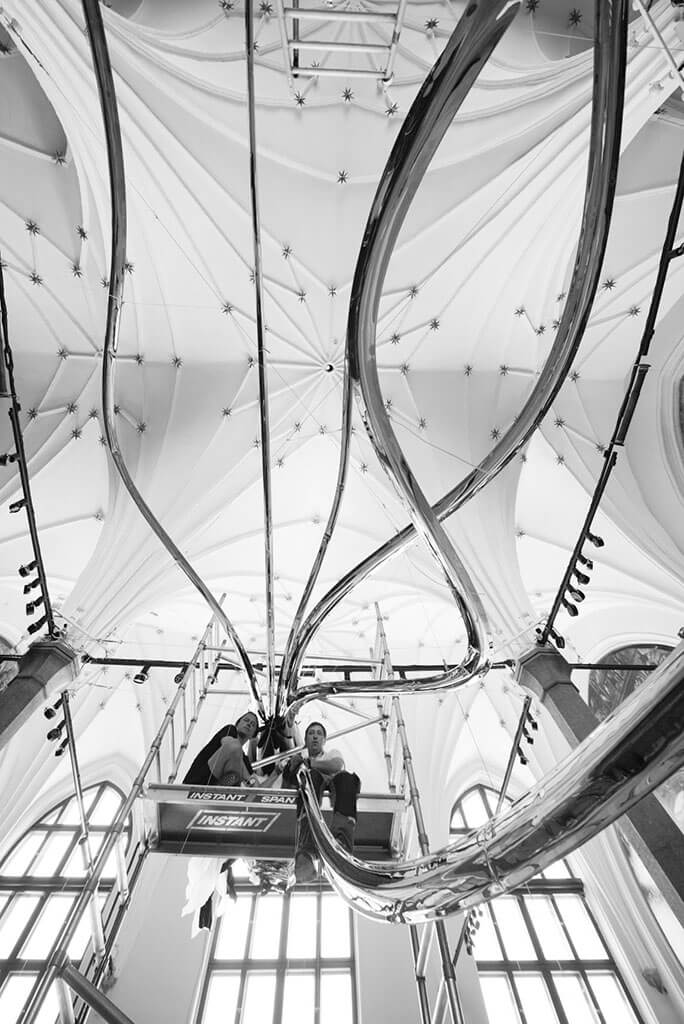 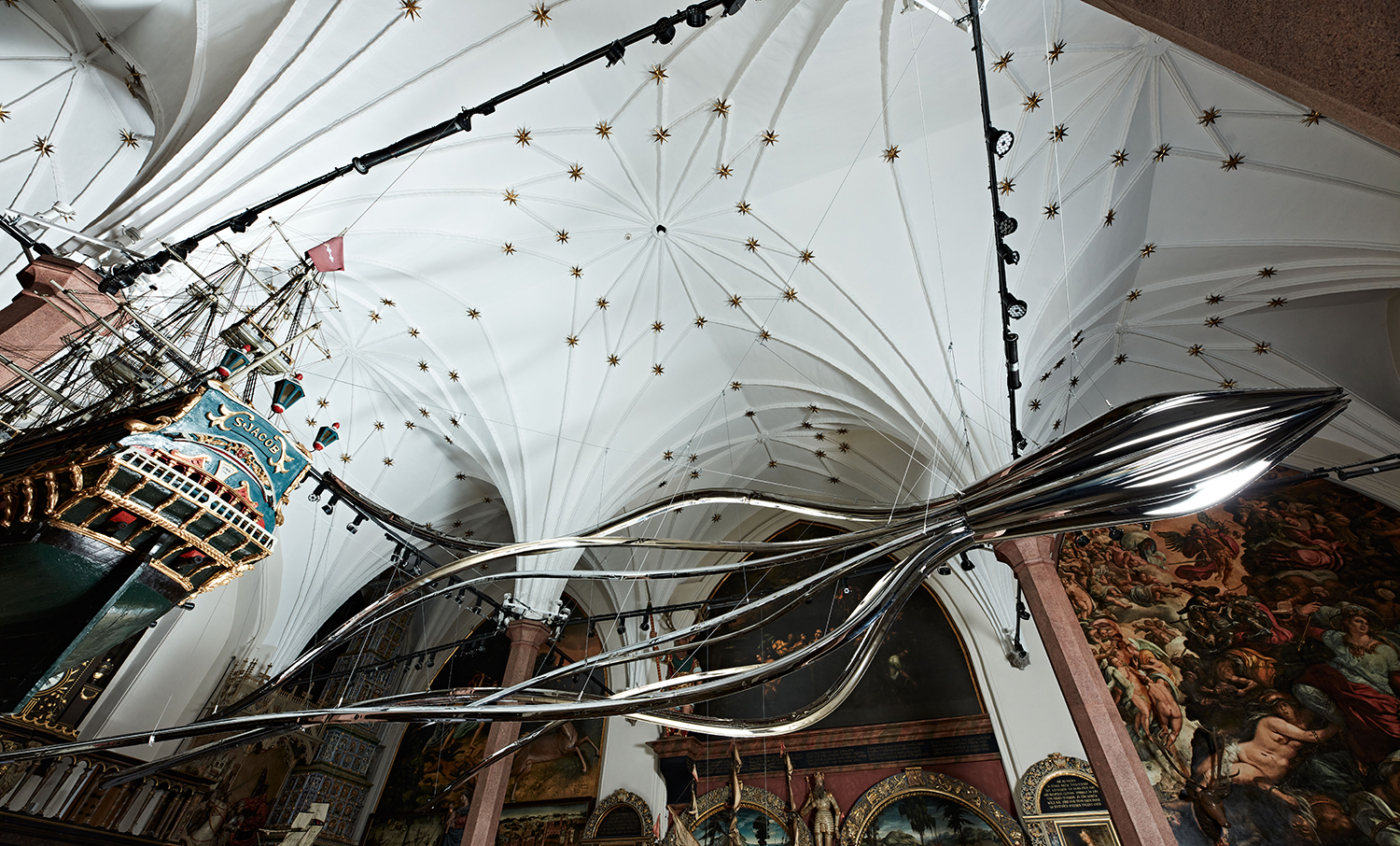 The steel monster is currently at the museum’s visitors’ fingertips. The sculpture, a huge steel cephalopod with undulating tentacles, reflects the Great Stove and paintings gathered in the Great Hall of the Artus Court, hovering among the historical models of ships, above the heads of the visitors. It brings to mind the depths of the sea but is also a manifesto of the recognizable style of Oskar Zięta – who transforms cold steel into poetic sculptures inspired by organic structures.

More info about the exhibition → 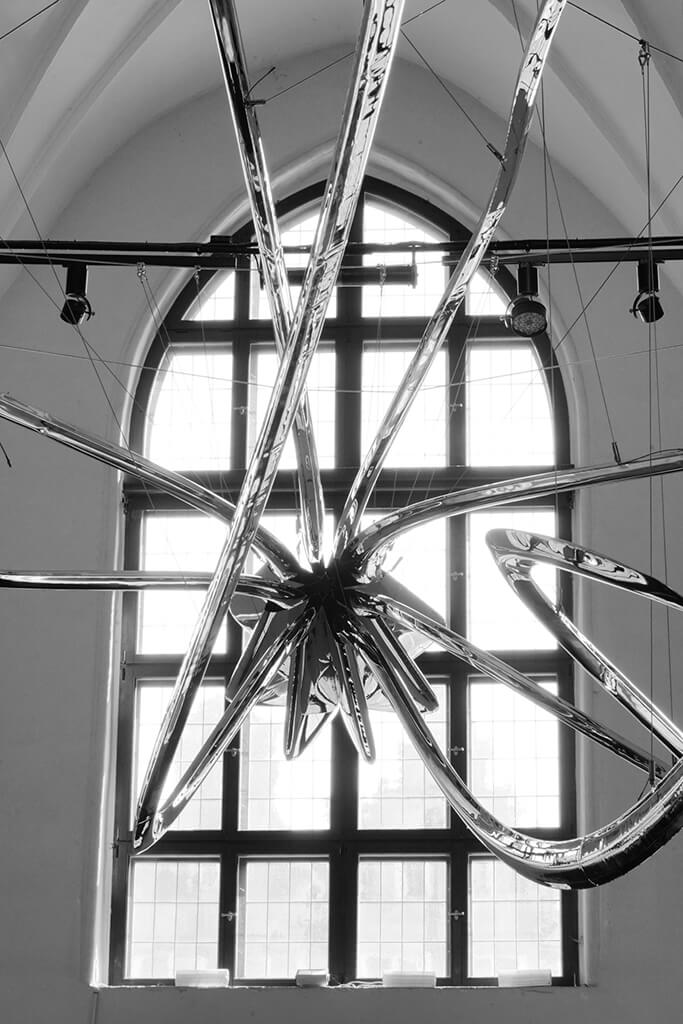 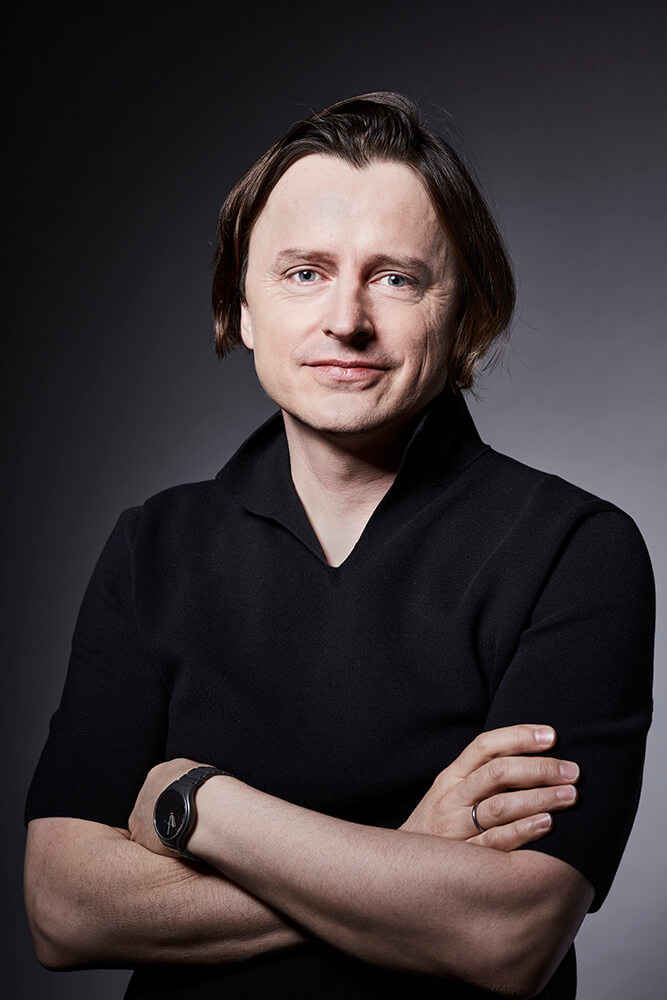 architect, artist and process designer. Creator of over 200 original utility forms that manifest his own recognizable style. Author of sculptures that demonstrate his passionate experimental approach to design. The main paradigm of his work is exploring the formal and technical properties of the metal transformed using the proprietary FiDU technology.

He obtained his PhD at the ETH University in Zurich and is a lecturer at the SWPS School of Form in Warsaw. Author of the iconic PLOPP stool (2007), and the highest sculpture in public space in Poland, WIR (2017), as well as NAWA (2017),  a pavilion sculpture nominated for the prestigious European Mies van der Rohe award.

Zięta’s design has been awarded many times, incl. Designpreis der Bundesrepublik Deutschland Award, Red Dot and Audi Mentorpreis Awards. He collaborated, among others with Audi, Architonic, Ballantine’s, Pirelli and the Victoria & Albert Museum. His works are in the collections of the Museum für Gestaltung in Zurich, the Pinakothek in Munich and the Pompidou Center in Paris. 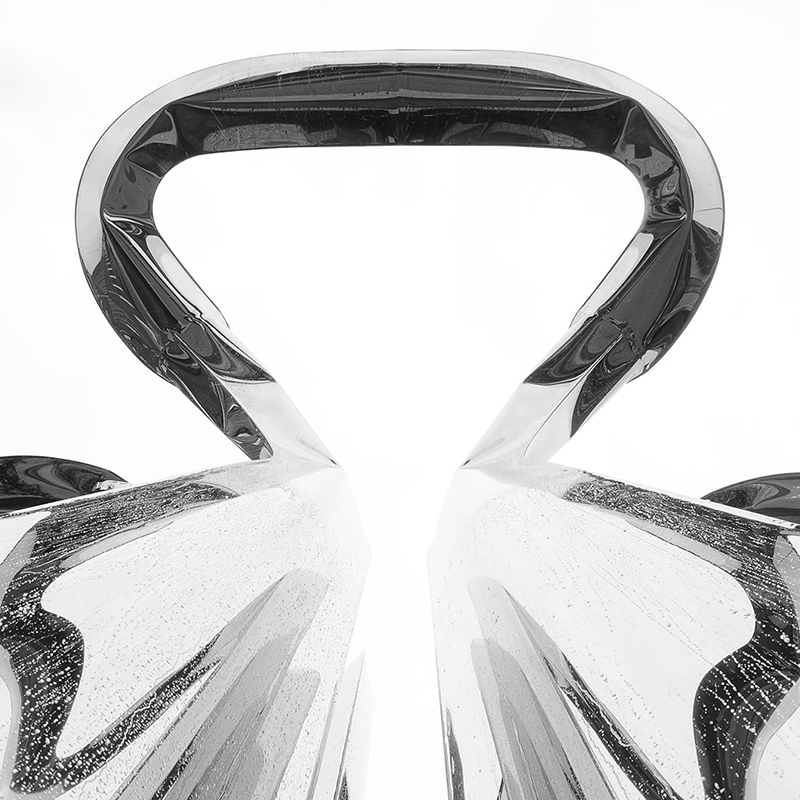 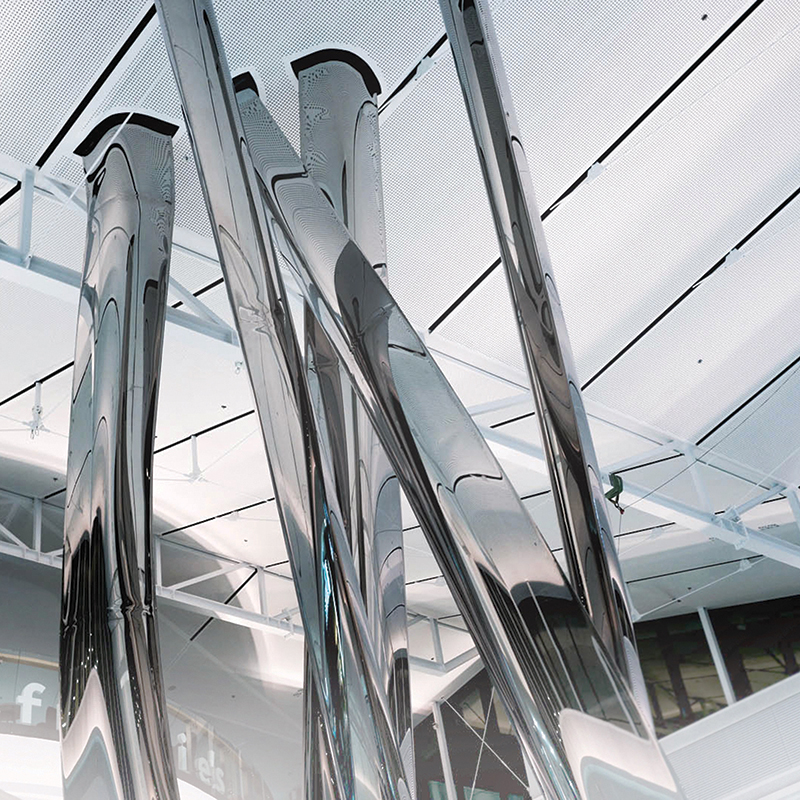 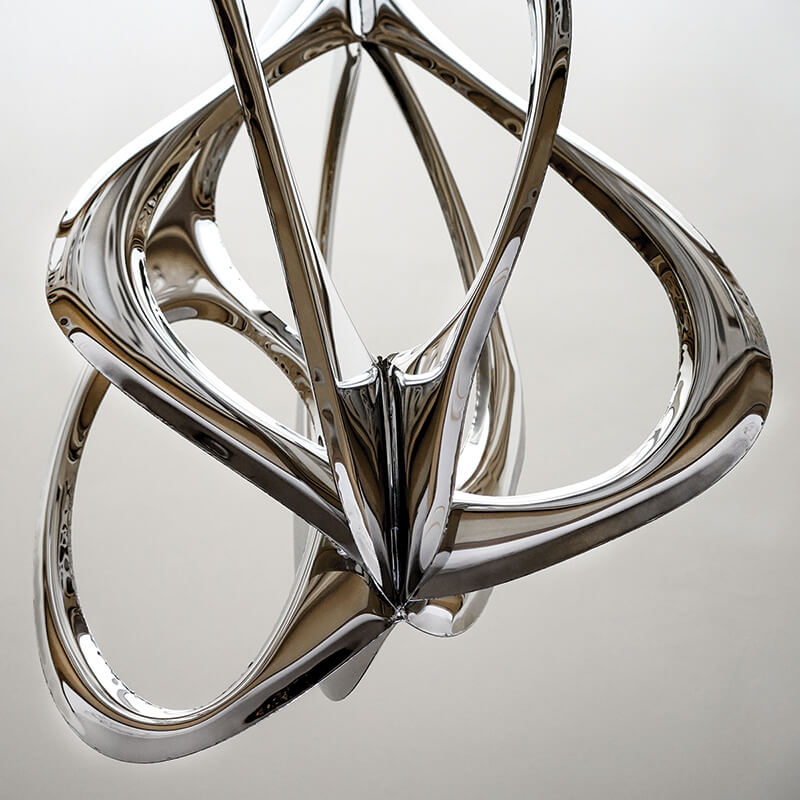